Micro drives with the “strength of a giant” #

From consumer electronics to systems control, automotive technology to aviation and aerospace – today, electronics are absolutely essential in many sectors. They increasingly replace mechanical components, eliminating wear and tear and thereby extending the service life. What is easily forgotten in this regard is that electronics are also subject to the laws of mechanics. Mechanical test equipment is crucial to test components for the secure hold of welded, soldered or adhesive bonds. A new, mechanically intricate test probe with universal clamping jaws, that can even grasp the individual bonding wires, is in line with the trend toward ever smaller components. Serving as an actuator for these is a micro drive that can be precisely controlled using a miniaturised motion controller to relieve the control unit in the test device. 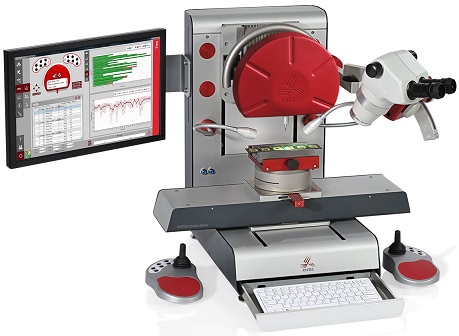 For electronics components, mechanical durability is no end in itself. Thermal stress, ageing or magnetic influences can also impair the fastening points of components on circuit boards. Even if the welded, soldered or adhesively-bonded points withstand the stress, the circuit path can still separate from the supporting board. To even attempt a quality assurance for such stresses, mechanical stress tests are essential. Special testing machines made by xyztec in the Netherlands, such as the Sigma Series, provide certainty as to whether the construction or the soldering process meets the specifications. One problem with this is the large spectrum of component shapes and sizes and, as a consequence of this, also the broad range of forces that must be exactly measured. Especially with regard to the measurement of “tensile stress”, this requires effective adaptation of the test equipment to utilise modern electronics.

The Dutch specialists therefore decided to design the test probe for tensile tests as universally applicable as possible. Thus, in the Tweezer model, electrically powered, interchangeable grippers are used in the probe. These can grip a diverse range of components and even bonding wires. The principle of the test probe demanded a very small drive, and xyztec put its trust into FAULHABER as a partner for it.

Mechanically intricate implementation. Securely gripping the smallest components for mounting is comparatively simple; often, a vacuum-gripper is entirely sufficient. With a stress test it is a completely different situation. In the case of the electrical, interchangeable head, the tensile “testing force” amounts to some 0 to 80 N, with a maximum of 100 N. This requires gripping forces of up to 80 N at the tips of the grippers. The drive must be able to quickly – the closing time of the jaws is only about 1 second – and reproducibly deliver this force in the test probe in order to achieve an acceptable operating rate during automatic tests.

The engineers solved this problem by combining several components. A threephase, 5 mm diameter micro motor with compact planetary gearhead and spindle shaft output serves as the heart of the drive. A special four-quadrant encoder is mounted on this spindle so that positioning in the micro-range is possible. The drive is controlled by means of a speciallytuned motion controller that is also very compact. It also takes care of regulating the retention force by varying the current flow through the motor. Additional force sensors (strain gauges) on the grippers verify the result to ensure that consistent, exact clamping values are always adhered to. The offset transmission with spindle shaft reduces the rotational speed and increases the torque.

Powerful drive system with the smallest installed size. The test probe for the tensile test is 360° pivot-mounted in the basic unit. The rotary movement is achieved by means of a gear wheel on the probe and external drive. All other functionally necessary components must be located in the Tweezer itself.

These include the sophisticated mechanical workings for the reliable linear guidance, which – considering the forces of up to 100 N – may not be built too delicately. After all, a deformation of the guide in the probe would impair the precision of the measurement. Quite a few additional components are also included to achieve the widest possible measuring scope: In addition to the guidance, the probe contains the easily exchangeable grippers, the drive motor with the spindle gear fitted, the motion controller for the drive, the position encoder for measuring the gripper opening, force sensors, integrated CPU with firmware and a USB interface, and for manual measurements also a controllable LED illumination.

In all areas, including testing technology, the continuous trend towards miniaturisation is a challenge for the components to be used. FAULHABER has the largest range of micro drive technologies for this purpose.