As gold ball bonding geometries reduce, so too does the height of the ball bond. The thickness of the passivation layer though remains the same. This creates a problem when shear testing, because the thickness of passivation layer is greater than the shear height required to test the bond. Conventional shear testing then results in the shear tool “scalping” the top of the ball, low test forces and no measurement of the bond strength. 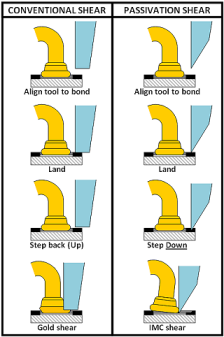