This manual is a guide advising what to consider and how to perform an optimal Cold Bump Pull (CBP) test. This manual focuses on solder ball testing, but the principles apply equally to most bump testing.

This extensive how-to consists of 12 paragraphs. You can use the table of contents on the right to navigate between sections. 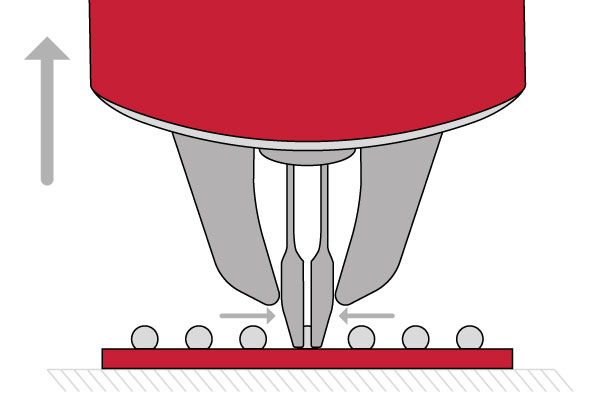 What is Cold Bump Pull (CBP) #

CBP stands for Cold Bump Pull or Cold Ball Pull. To pull the ball it is necessary to reform the ball in a “mushroom” shape with a tweezer. Tweezers have special gripping jaws with cavities that reform the ball when the tweezers close. The jaws of the tweezers provide the pull grip. The tweezer applies an upward force and effectively pulls the ball away from the substrate, moving the Z-stage until the bond breaks or a pre-defined force threshold is achieved.

Do not worry about reforming the ball. Reforming is due to the load on the tool. It is better to get a higher test force by “over gripping” the ball so that the reforming cuts over the bond, rather than “under gripping” the ball and risking unrealistic failure modes in the bond. Remember: Always seek to test the bond of interest in a way that generates the failure mode of interest, or the highest force. 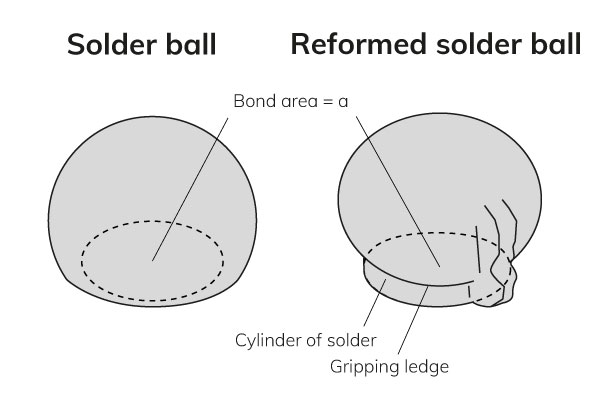 Ideally, the “stem” of the mushroom shape should be larger or the same diameter as the bond area. It is better if over gripping tests the bond at a higher force. Over gripping can still lead to getting a ductile break or extrusion, but the bond has been tested to the highest force possible. 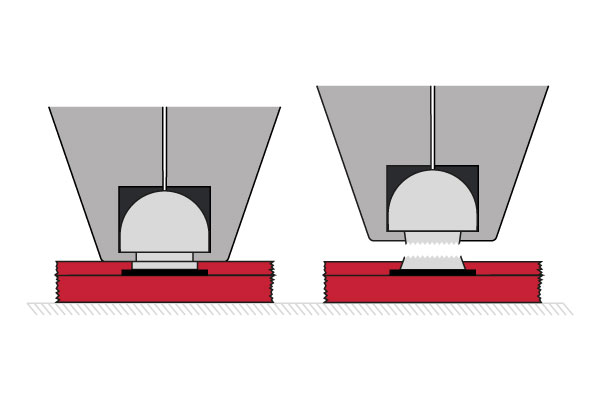 Type of balls to test #

The CBP test method is the ultimate solution for solder ball testing, but the principles apply equally to most bump testing. 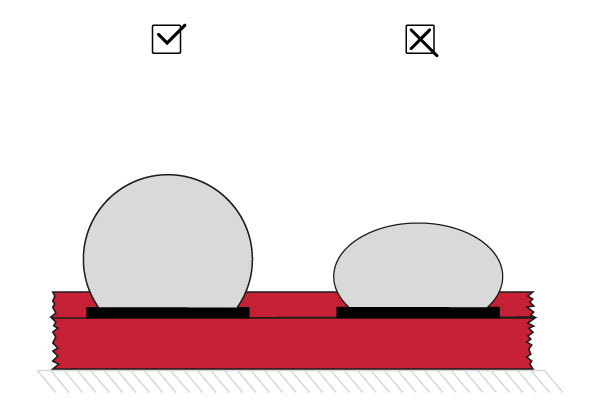 Low bumps are harder to grip. Therefore, the ball height-to-diameter ratio (diameter/height) should be less than 2,2. Solder balls with values above 2,2 should use shear testing. As always, the rule is to choose the test that gives the most failure modes of interest, and if none of them do this, select the test that produces the highest test forces. 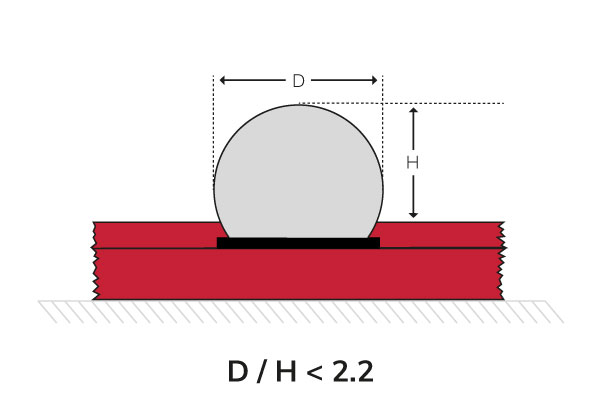 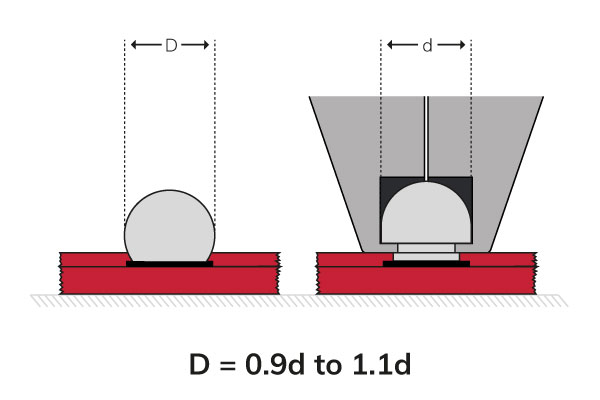 USB tweezers can fully control the gripping force and the opening and closing distance. Tweezers have all features for Cold Bump Pull testing:

The gripping jaws (tweezers with tips) are driven by a built-in, closed loop,
3-phase brushless micro-drive to accurately open and close. The jaw actuators incorporate a strain gauge to precisely measure and control the gripping force. Ball pull jaws have a cavity to reform the ball. The edges of the jaws provide the pull grip. Use jaws with back relief if the bumps are very close to each other.

To reform, grip, and pull a ball with the maximum force possible, the jaws must be of suitable quality and without broken, worn, or rounded edges. Therefore, it is essential to monitor jaw quality during use. 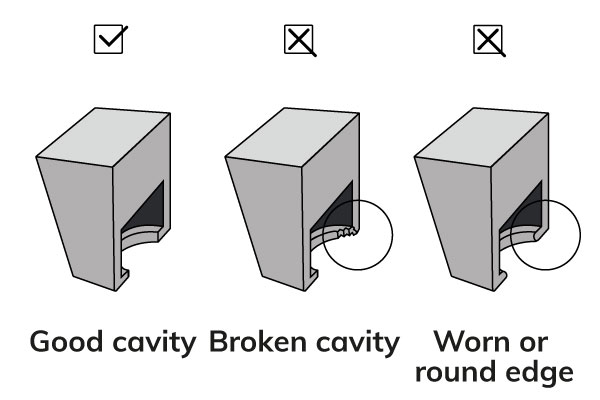 The 2 jaws must align as well as possible. The maximum error of any misalignment side to side and closing height is 5% of the ball diameter. Cavity contamination is also a cause of poor jaw quality, reducing the grip force. 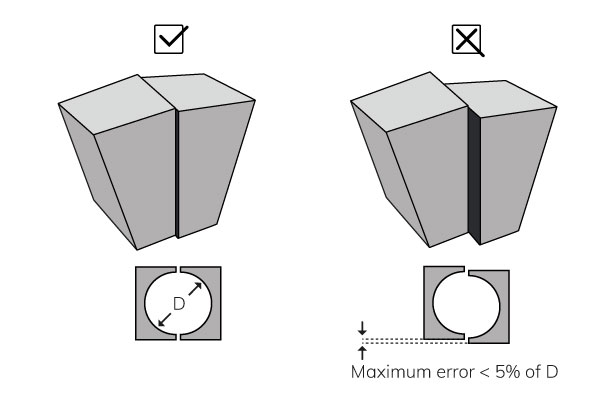 Bump debris builds up in the cavities of the jaws. Therefore, it is essential to clean the jaws before starting a new test to maintain efficient grip and consistent bump testing. It is easy to remove contamination manually with a brush or a needle, but do not damage the jaws and cavities. 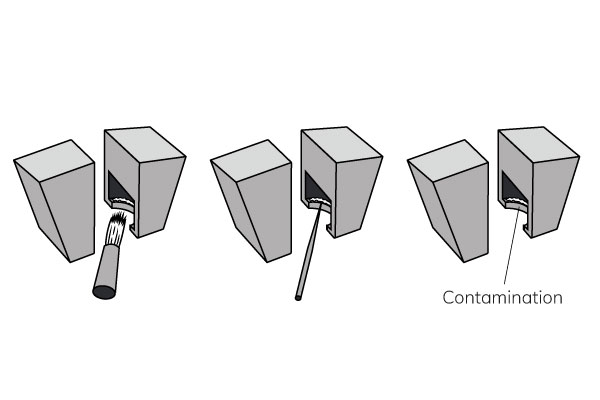 Automatically remove solder debris with a CBP jaw cleaner. This contactless cavity cleaner melts the solder with a high temperature and high-pressure air jet and then blows it into a fine safe material where it is absorbed. 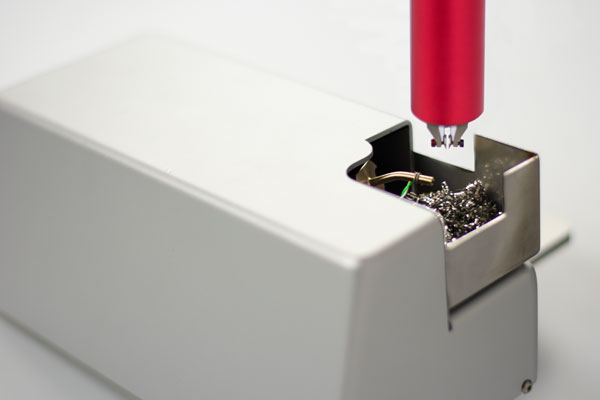 The first step of doing a Cold Bump Pull test is the alignment of the jaws to the bump. Aligning comprises of the jaw opening and centering the jaws above the bump. 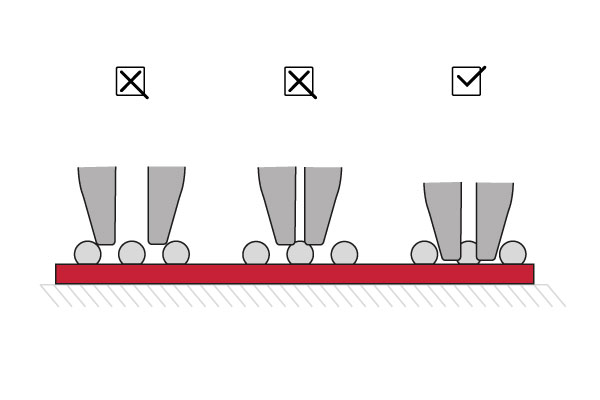 The jaw opening may not hit the bump or others around it when they descend to grip.

Set the test method to “return to the start position.”

Align the jaws over the bump before starting a test. First, set the Z height, so the bottom of the jaws is just above the tops of the bumps. The closer they are, the easier it is to make the alignment in X and Y. Make sure there is sufficient clearance not to touch the highest bump. Also, make sure to select the “return to the start position” option when the bump pull is complete. The set height will remain when aligning for the next tests.

Once the height is set, align over the bump, so the jaw cavities are concentric with it. 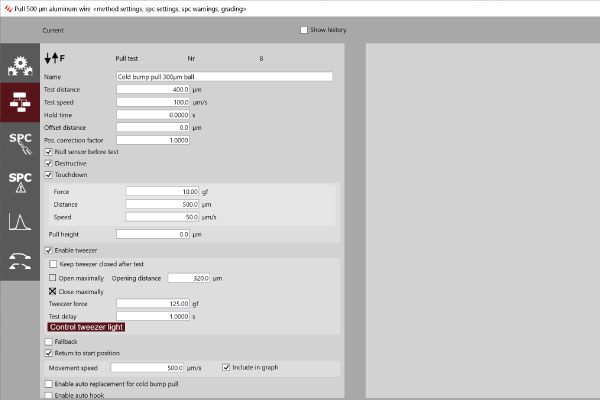 Set up grip force and practice X and Y alignment #

Test or practice the closing on a bump to get used to the X and Y alignment and to set an initial jaw closing force. Choose a bump and align over it, then manually (slowly) drive down to just touch the substrate. 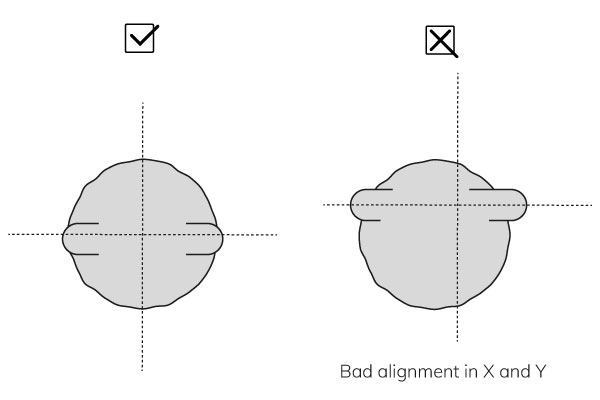 The jaws take time to close, and the bump takes time to reform. Bumps of less than 100 µm reform almost instantly, where reforming a large bump of 750 µm can take up to 5 seconds. Therefore, we waited for 5 seconds when testing the first grips.

Observe how long it takes for the jaws to stop moving when testing the grip and alignment. To ensure the bumps will fully reform at the selected closing force, use the safe closing time delay (Hold time) in the test method program.

The Z axis drives the jaws down to touch the substrate to a programmable Touchdown force when starting a test. This force depends on the application. It should be as low as possible but sufficient to ensure the jaws come into good contact with the substrate.

Typical Touchdown forces should be:

Best results are obtained by trial and error but initially set the landing force as shown above.

Most CBP tests require the jaws to close in contact with the substrate. This gives the strongest grip. However, in the case of metal-defined pads, a “pull height” may be required to avoid damaging the bond when the bump is gripped and reformed.

Metal-defined bumps often have low height and require a ”distance from surface” resulting in a poor grip force. On the other hand, the mask does not support the bond, so shear testing is often a better option. 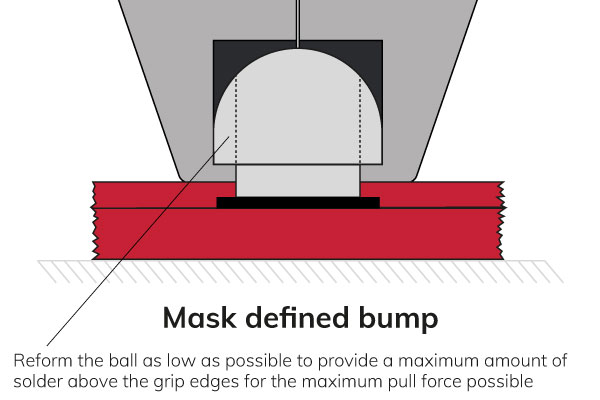 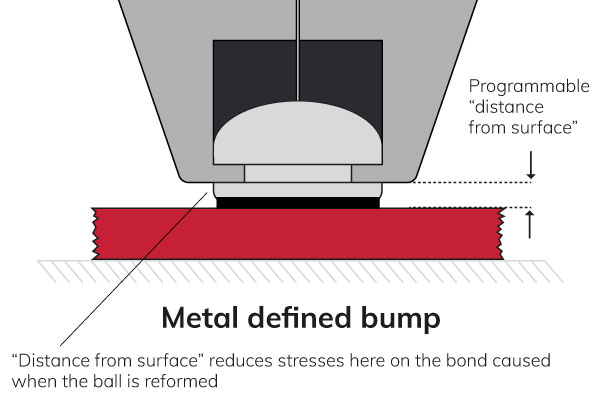 A bond test should produce the most failure modes of interest by applying the test load most like the true load. No failure mode of interest? Test with the highest force possible. 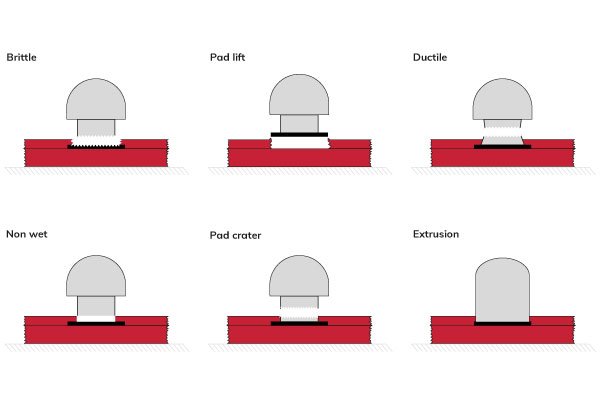 1. Most failure modes of interest #

CBP testing focuses on the strength of the bump to the pad and/or the pad to the substrate. This is the “bond”.

The construction of the bond varies depending on the application. There can be a few or many layers in the bond. The objective is to know how the bond fails and at what force.

2. Load most similar to the true load #

The failure mode is ductile or extrusion if the bond is stronger than the bump. In this case, set up the test to get the highest force possible.

Note, if the extrusion force is only slightly higher than a ductile failure, it may be better to set the test to get ductile failures. This is because extrusions can contaminate the jaws with debris much more rapidly, making cleaning more difficult.

Try a few tests with the initial settings and record the failure modes and test forces.

No bond failures? Try different closing forces to find the one that gives the highest test force. The failure mode can then be extrusion or ductile. For balls above 100 µm it will probably be a ductile failure mode. For balls below 100 µm it is sometimes an extrusion.

When increasing the closing force, watch how long it takes for the bump to reform. Then, it may need to increase the Hold time.

Test speed will have minimal effect in standard CBP because all tests are relatively slow. This is because the jaws are locked into the sample by the grip.

There are many ways to set up a test, but a typical test sequence is: 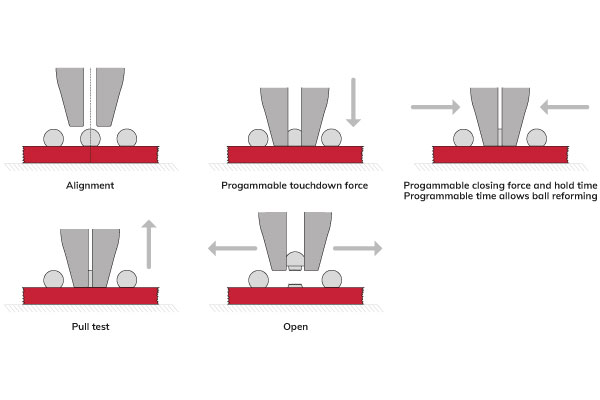 The construction of solder ball interconnects widely varies. Variables include: 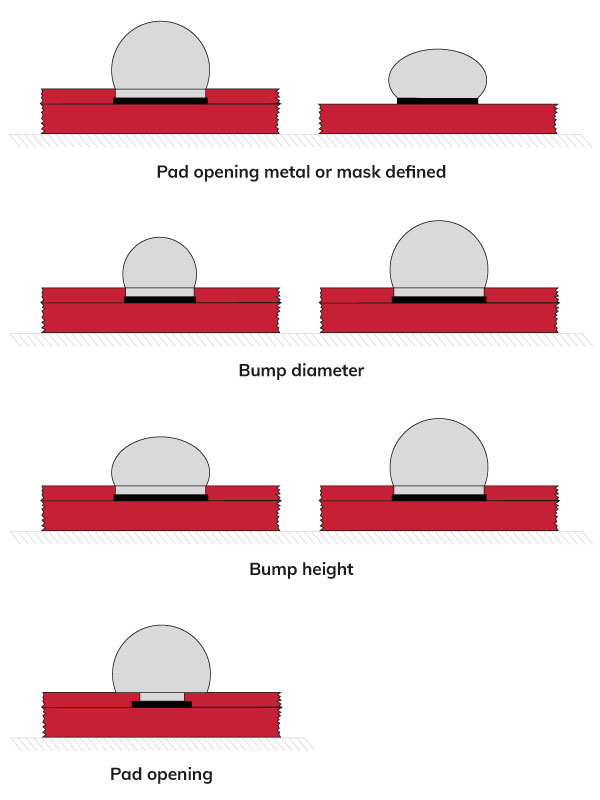 There are also many different bump alloys, pad alloys, pad surface finishes, reflow processes and aging. Because of this variety, there are no industry standards for bond strength. As a general guide based on the ductile failure and the strength of solder, the maximum test force for a ball diameter is shown in the graph below. 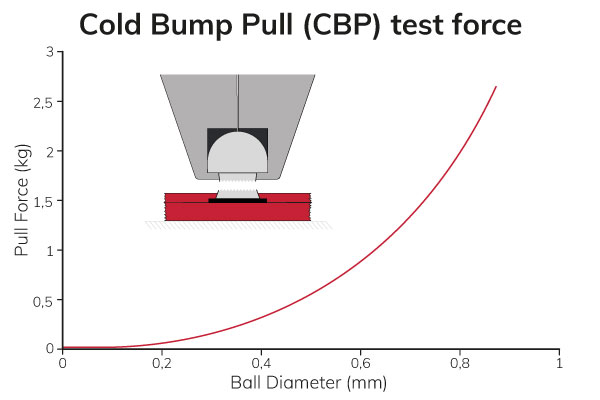 JEDEC sets the following 5 failure mode definitions and divides them into 8types. For full details check the JEDEC website.

Solder ball fracture at or above the surface of the solder mask within the bulk solder material.

Solder ball lifts from pad and any portion of the pad top-surface plating is exposed.

The standards JEDEC JESD22-B115, JEITA EIAJ ET-7407 and IPC-9708 apply to Cold Bump Pull testing. Below is an overview of the most common failure modes for solder bump testing. It is also possible to download the result codes in our grading library. 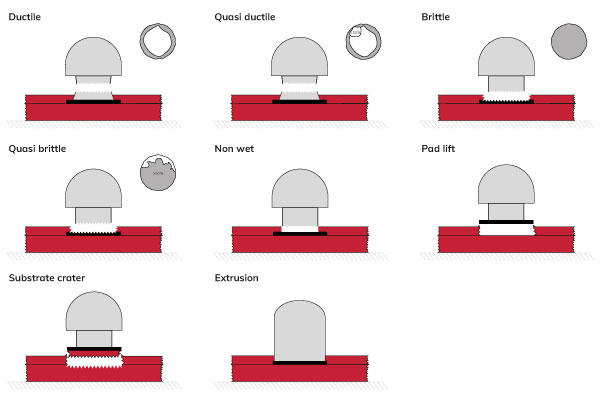 A Sigma bond tester is the most advanced bondtester for solder ball testing. It comes with game-changing automation capabilities and high specifications in:

Contact us an challenge us to customize a bond tester to solve your quality control processes.