The stud pull test is based on the principle that an adhesive connection is made with the carrier (or object to be tested) by using a glue that is stronger than the bond that needs to be tested. 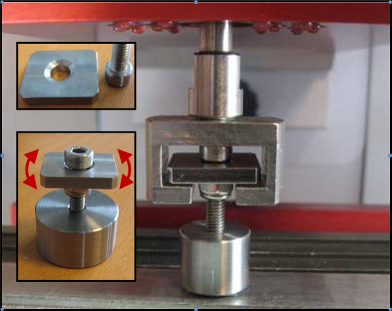 The Sigma can be provided with a micro dispenser that can dispense very small drops of glue (micro liter amounts) very accurately and is cured with UV light. Combined with a USB Tweezer and special tips that look like the inverse of a mushroom, a glass stud can be taken from a magazine fully automatically and placed with a predefined pressure on the surface with the glue.

The stud pull test is used to test exotic applications such as bonded dies or pins pressed in FR4 boards. For die attach, the sample is clamped in a work holder and a stud is glued on the part to be tested. The stud is then pulled by a tweezer or other specially designed tooling. Depending on the stud pull application, xyztec can offer solutions from a few grams up to 500kgf. We also offer a manual tweezer that can test up to 40kgf and an optional camera system is available to record and analyze failure mode.

As an alternative to stud pull, xyztec developed the lid pull test by mechanical grip method. This approach eliminates the need for disposable metal block/studs and adhesives. Thus it is quicker, safer for operators and avoids clean room contamination.